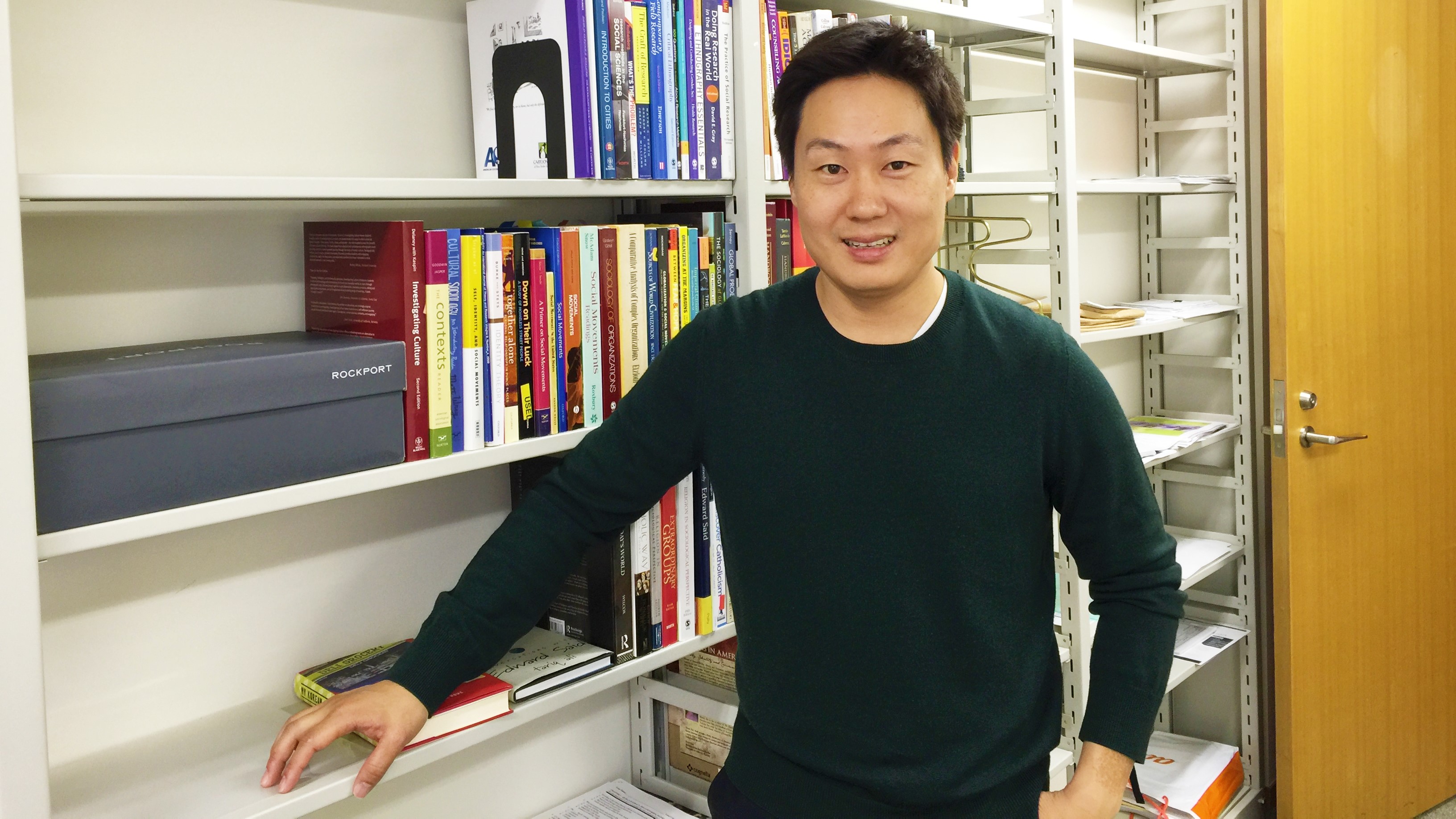 ——Firstly, where are you from?

I was born and raised in San Francisco, California. My parents emigrated from South Korea in the early 1970s. This makes me a second generation Korean American.

——What do you do?
I study sociology and my interests include the family, immigration and men’s gender role acculturation as it relates to both masculinity and the changing culture and conduct of fatherhood. I’ve studied Korean men’s participation in men’s movements and how they strive to become more relevant family members. My work has focused on Asian American men and their counterparts living abroad in East Asia. Right now, I’m interested in how men reconcile their ambivalence toward their fathers’ parenting.

——What aspect of masculinity are you interested in?
All things! I’m interested in how masculinity is connected to race,
immigration, globalization and men’s movements. I feel that family and gender issues are becoming increasingly important given the rapid social and economic changes throughout East Asia.

——Can you explain the detail?
Yes, I studied a men’s movement called “Father School” which originated in South Korea and has since spread to over 53 countries. The movement is part of a larger effort to help fathers become a better fit for their modern families. After the IMF economic crisis the 1990s many men lost their jobs overnight. Lacking the breadwinner role central to their identities, many fathers began questioning their roles and contributions to their families. It is an intensive program that I call a form of “gender boot camp” men are put through intensive interaction via group activities and homework assignments to improve their performance as emotionally expressive, caring, and responsible fathers and husbands. You can call it an effort to soften patriarchy. Father School also exemplifies the changing nature of fatherhood and how non-Western men of diverse backgrounds are actively engaged in a search for meaning, fulfillment, and purpose in their identities and roles as men and fathers.

——What brings you to ICU?
ICU is a wonderful school whose liberal arts focus is of great interest and excitement for me. I’ve always been part of organizations that seek to build bridges between countries, and ICU is no different. The students and faculty are bright and their sensitivity to international issues is very refreshing. Japan has faced rapid social and economic changes and Tokyo is truly the hub of East Asia. In terms of my interest in the family, Japan pioneers the aging population, declining birth rate, and even the salaryman–a term used to describe men in South Korea as well. At the same time, I’m keenly aware of America’s cultural, social, economic and military presence in East Asia. ICU, therefore, is a unique campus, situated in a dynamic city, allowing me to further my interests concerning the Pacific Rim.

——Why are you interested in the “masculinity of salaryman”?
In my opinion, the family is the most important and fundamental unit of social organization. The male experience is certainly part of that. For men living on the margins, what does it mean to be a man in contemporary society? Men experience and enact their masculinity within unique social and historical context. Men’s social location in terms of class, race, sexuality, religion and immigration status (among others) all shape their experiences in profound ways. For example, we don’t really understand how men acculturate to their gender role. I’ve encountered countless men in Asia who struggle to maintain balance between work and family on a daily basis. Sometimes they do a great job and sometimes they fall short. In the case of immigrant families, men can do damage to their children either through neglect or though verbal and even physical violence. I have been fortunate to listen and hear the stories of men as they touch upon marriage, fatherhood, breadwinning, and their own emotionality. Moreover, Asian men and their participation in men’s movements has rarely been the focus of research. I feel that the cultural changes we see in the family are a broader reflection of the larger structural changes unfolding in the economy.

——What is the first impression of ICU?
I had an amazing impression of ICU. I felt the students were very warm and welcoming. They are a curious group eager to learn about almost everything under the sun. I’m confident they will be the next generation of global leaders. In Japan, ICU is certainly a beacon for openness, constructive change, and enthusiastic multiculturalism. Faculty and students are actively engaged in enhancing international peace and cooperation. I feel at home so thank you.

——How are you going to teach “Principles of Sociology”? What is the main goal of the lecture?
The main goal of principles of sociology for me is to help students to get students excited about the world in which they live. Sociology is the study of social life and transformation so it is a dynamic field. In the main, I want to give students a mental toolkit to help them analyze and understand their place and society—no matter if they decide on the major. Sociology gives us a framework for asking questions and a vocabulary for understanding things like socialization, culture, family, race, gender, inequality, globalization, and many other important topics. Having been in business before, I feel the sociological perspective is an advantage for students as they pursue their dreams and future careers. The main goal of lecture summed up in one word would be “awareness.”

——Thank you for your cooperation.