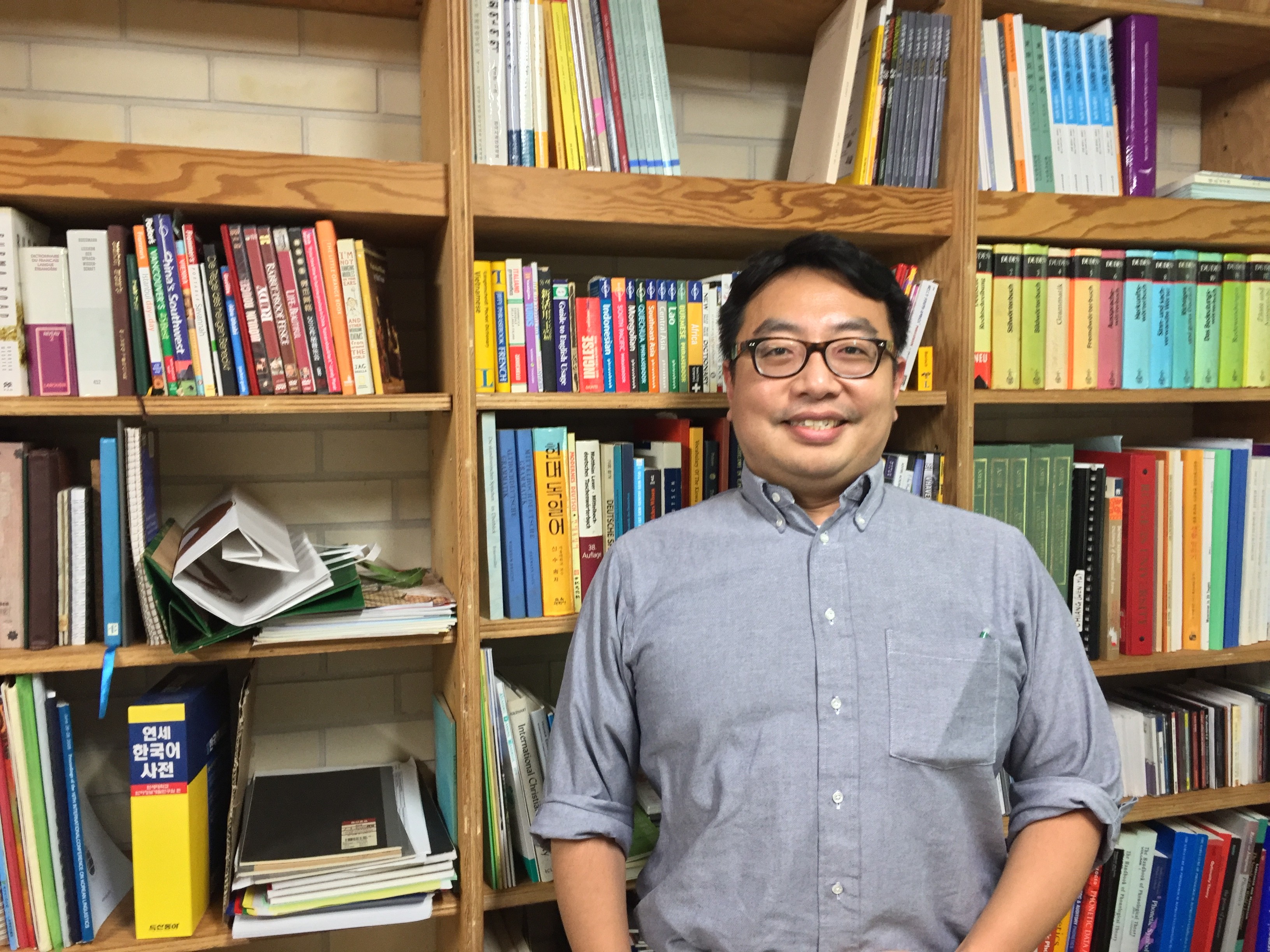 –-What classes do you teach here at ICU?

I teach phonetics, phonology, Introduction to Linguistics, and experimental linguistics. I only teach English classes. For this semester, I teach Phonology and Phonetics, which are separate courses. In the winter, I am going to teach Experimental Linguistics and Intro to Linguistics in English. In the spring, it’s possible that I might teach historical linguistics or maybe phonetics again, though my schedule is not fully established yet because I just started teaching here this term.

–Where are you from, and what did you do before coming here to ICU?

“Where are you from?” is a very difficult question to answer. Before I came here, I was in Connecticut. where I was a linguist in the English Department of Central Connecticut State University. I taught undergraduate linguistic courses as well as graduate courses, which were mostly designed for TESOL (Teaching English To Speakers of Other Languages) students, which is a field for if you want to be a certified English teacher abroad.

I also did my PhD in Linguistics at Rutgers University in New Jersey, USA.

–Why did you decide to come here to ICU?

Various reasons. I always liked the idea of a liberal arts education, smaller universities, and which was the main reason. I also have many collaborators in linguistics at various universities such as Aizu, Keio, Tokyo Kaidai (TUFS). We conduct research together in various topics of phonetics and phonology. Of course, I also like being here, in Japan.

–Have you been here in Japan before?

I’ve entered Japan more than thirty times, though I’ve never lived here. My visits have always been on my way to Korea, since my parents were live there, even though I was born in Germany. That’s why it’s difficult to answer the question of “Where I am from?”. I went to the US after I finished my Master’s degree in historical linguistics at Seoul National University in Korea.

Yes. I’ve also worked in South Africa and Myanmar as a researcher. I worked on languages there, which is why [I keep the flags of these countries in my office].

–Do you speak the language they speak in Myanmar, Burmese?

–What languages do you speak?

I speak English, German, Korean fluently, a little bit of Japanese, French, Spanish and Chinese, as well as some Burmese and Tsonga. Tsonga is one of the eleven official languages of South Africa, which is a country that Hibiya sensei talked about during the nyuugakushiki. I go to South Africa often for work, almost once a year.

–As a person who has no background in linguistics, can you explain to me what it is about?

Phonology is about the study of sound and how it happens, in a sense. It really wants to know better in terms of how we organize sounds, or we speak in the way that we speak, with the assumption that there’s some type of cognitive process going on. That’s the difference between phonetics and phonology. Phonetics studies the physical aspects of sounds, so if you’re a physicist, it’s very easy to study phonetics because it includes learn acoustics, such as the science behind how sound waves work. In phonology, you look at sound patterns and try to understand them. There are many theories to account for in sound patterns. For example, in Japanese, there is a very interesting, famous phenomenon. When you say paper [in Japanese], it is “kami”. When you have folded paper, it is “origami” (with a soft “g”). Now there is wind — “kaze”. When you have “god’s wind”, which was a term used in the Second World War, it is “kamikaze”. Why is it not “kamigaze”? These kinds of things — there must be a reason for them. Why does “kami” become “gami”? And “sara” becoming “zara” — yet “kamikaze” stays the same.

[Phonetics is] a humanities subject that studies language, but it has a lot of similarities with the natural sciences. That’s why linguistics is also called a “behavioral science” — it goes together with psychology. In my case I record people and use a program to analyze them.

Recently I’ve also been doing some articulatory studies — that means how our articulators like tongue and jawbone affects how we speak. With my colleagues, I work on ultrasound studies, through which we can track and analyze the movement of the tongue as well as the acoustic signals. Some people also work with EMA (Electromagnetic Articulography), which is a device with which you put sensors on the tongue and record its movement.

–You obviously have care a lot about linguistics, can you explain why you have so much passion for this subject?

I always loved to learn languages because it connects with my passion for getting to know more people and different cultures — I love meeting new people. When I go to South Africa for example, it’s not like I go and come back. I go and make friends, and as we hang out, I would learn their languages from them. This would make me want to use them, such as when we go to KFC together, I try to order for them. All the people working in KFCs in South Africa speak English in addition to their own language, but they are often more comfortable with their own language. Most of them get so surprised because they never see non-natives using their own language, and when visitors come they speak English by default. In Japan, when someone from America comes they would assume they only speak English. It’s the same thing — when I went to the local school in South Africa they would see me and they would think I only speak English and speak to me in English . I would respond to them in their own language, and they would get very surprised. I do this because I want to show that their language is very important.

I also want to learn a lot about how human language works because there are many understudied languages in the world. There are about 6800 languages in the world and maybe about 100 to 200 of them are well-studied, while the rest aren’t. Because of the dominant languages in the world, half of them might die before the turn of the century. Take Okinawa-ben, for example. In about 30 to 40 years maybe no one would speak it anymore, as the Okinawa people, but would only speak Japanese.

–So as a linguist, would you say that your role is to preserve these languages?

Some linguists have that as a major role. As a linguist, I’m more interested in working on theory. I don’t just work on one language in particular, I work with many languages. For example, I recently presented an acoustic study that I did with a colleague of mine about Mapuche, a minority language spoken in Chile that very few people speak now because of Spanish influence. I believe that there is something interesting to find in all these different languages.

–Do you have a message to the students of ICU?

I have two things that I want to say. [First,] speaking English might seem like an effort for many students. While some of them are bilingual and some of them are not, I think all of these students have excellent ability. So don’t judge yourself among your peers for your English ability, because as an ICU student, you are already a member of a group of very select people who can speak and listen to lectures in English. I don’t want anybody to think, “Oh, my English is not as good as his”. I think that’s just a negative way of thinking.

I also want students to be proud of the liberal arts education they receive, because not many people are fortunate enough to be in a school like here. By being in a school like this, they are able to open their horizons, and in essence, they are able to do anything. The things that you learn here as part of a liberal arts community is that you know one thing well because of your major, but at the same time, you can be flexible in terms of accepting other ideas and working with others. These things are key in living a successful life. If you know more about different things, it helps you in understanding others who are different from you. Cherish your education, and think that what you get in here can help you in the best way.

–Thank you for your time and cooperation!